I’m a big dude who needs to work out more. Especially now that I’ve traded a manual labor job for a fully remote job, getting up and active has become more of a chore than I’d like.

However, Virtual Reality offers something that other home workouts don’t: Immersion. Sure, I could pick up some workout routines on Youtube, but I don’t actually have to do anything, and my ADHD will make me distracted very quickly

Plus, there’s documented proof that working out in VR can produce results. Don’t believe me? Check out some examples of weight loss thanks to VR.

So I set out with a goal to find out: What are the best VR Fitness games? 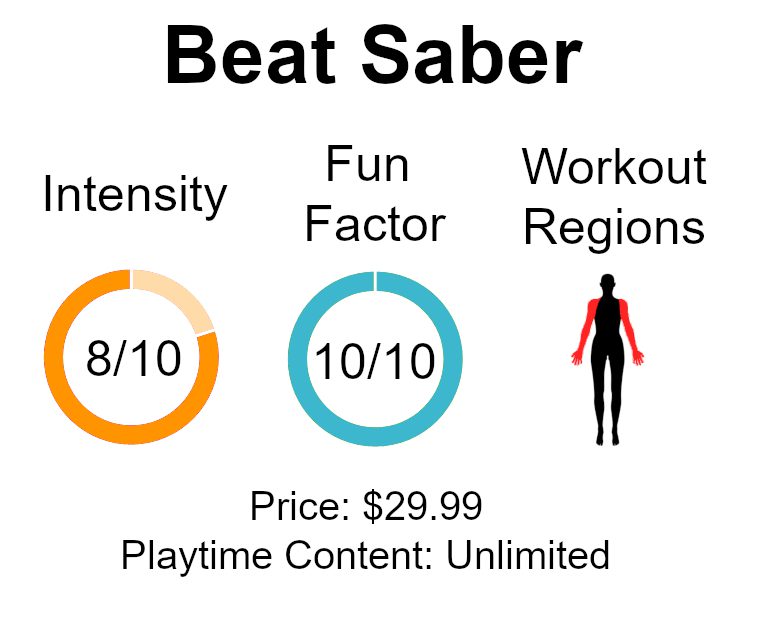 Working out to music is incredibly common. Plus, who doesn’t like music? It gets your blood pumping and your body moving, which is exactly what these games want you to do.

Rhythm games don’t provide as intense of a workout compared to true fitness games, but they’re highly addictive and are easy to fit into a routine. While there are plenty of cases of people losing weight thanks to these games (especially Beat Saber), they aren’t generally designed with weight loss in mind.

VRIHE ranks Beat Saber as equivalent to tennis when playing on expert difficult. Meanwhile expert+ is the equivalent of rowing.

For some fun workouts, Beat Saber is a great option. However, there are better options for fat burning. 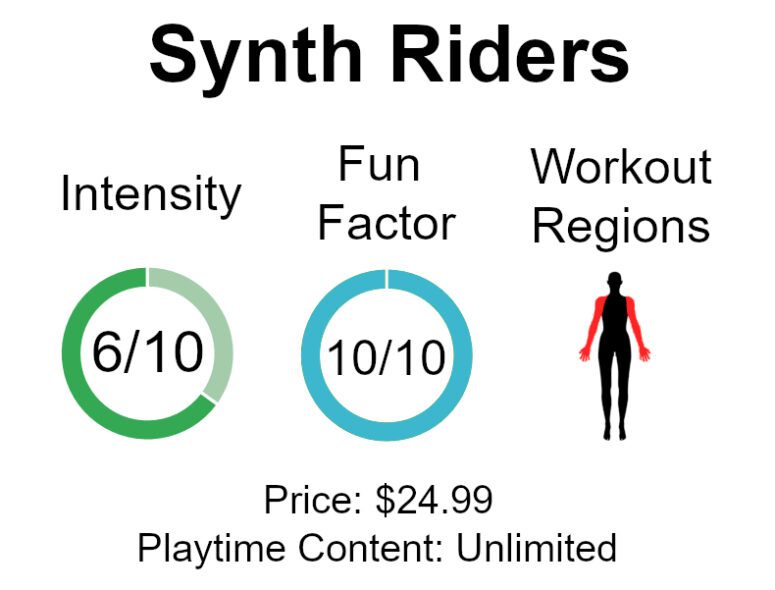 Oddly enough, I hadn’t heard of this game until recently, despite it coming out a month after Beat Saber. While they are somewhat similar, Synth Riders takes its own little twist on the formula.

Instead of cutting blocks, you touch (or punch) colored orbs to the beat, with the occasional rails to grind or special blocks to react to. The game also features walls like Beat Saber, but these are much more difficult to dodge.

Synth Riders focuses a little more on being able to dance to the beat, and in doing so, the beatmaps aren’t as complex as some of the similar songs on Beat Saber (with a comparative difficulty). It does get your feet moving a little more, but it’s not as intense as Beat Saber.

The VRIHE ranks this as the equivalent of using an elliptical machine. I can see the resemblance, as I don’t get nearly worked up in this game as I would in others. However, it’s definitely not a wrong choice for some light cardio.

While I find it fun, it’s not as good of a workout as the other ones on this list. But it does get the blood pumping, and it looks stellar.

3. Thrill of the Fight 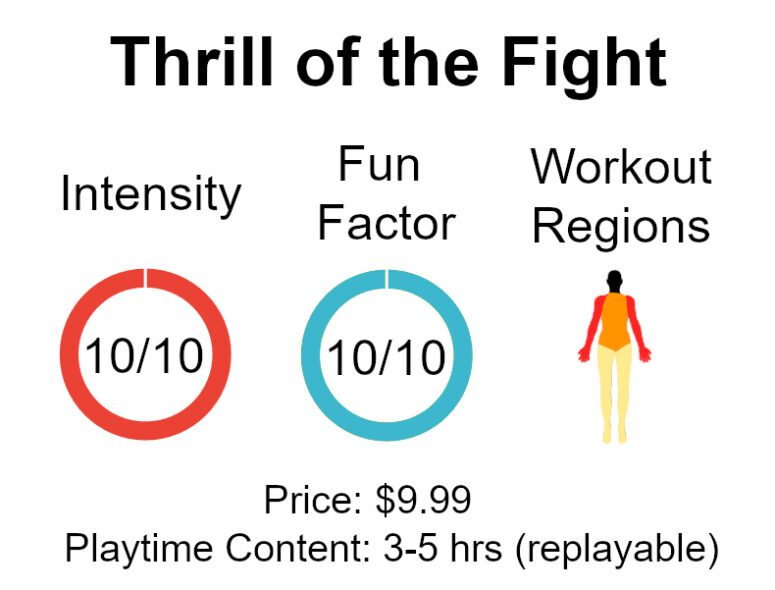 I always knew I was out of shape, but I’ve never been out of breath playing Wii Sports Boxing. So why would I be in this game?

Or so I thought.

Thrill of the Fight is probably the most tired I have ever been in a VR game. Doing two fights back-to-back had me heaving and panting and a sweaty mess, and it felt great. The game offers a wide variety of opponents, and gets you into the fighting mood quickly.

As someone who’s done some light boxing in the past, after a few rounds, you’ll get into the mood to bob and weave to dodge your opponent’s blows. The indicator to show whether or not your punch did any damage isn’t super apparent at first, and it’s occasionally wrong, but it’s still fun.

The game even has a little interior gym that you can practice with, including a speedbag. Your enemies will scale in difficulty pretty steadily, and by the end, you’ll feel like Mike Tyson pre-Mystery Team.

Unfortunately, the graphics aren’t great, but at the end of the day, you’ll be panting and sore, just like in the gym.

It’s got the equivalent rating of rowing from the VRIHE, and while my out-of-shape body disagrees, it’s probably accurate. A few rounds in this game will have you sweating and ready for a break from your coach.

While the graphics may suffer, this game is excellent in almost every other regard. I wish the hit detection were a little more accurate, but overall it’s a game I’m happy to throw hands in. 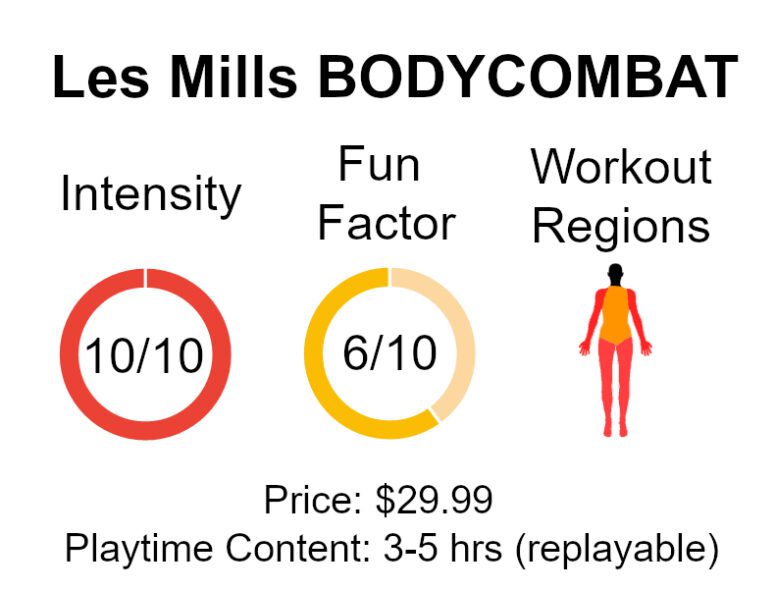 This is one of the newer titles on our list, and it comes from the same folks who brought you several other home workout programs, but now in VR.

Unlike Thrill of the Fight, this is more of a cardio boxing game than a boxing simulator. Like in other titles, you’ll be punching and dodging and knee-ing targets to some music, although this is not a strict rhythm game.

One of the downsides to BODYCOMBAT is that it doesn’t have a lot of depth yet. As of right now, it only has 30 workouts, but they do plan to add more content in the future.

The VR Institute of Health and Excercise hasn’t rated this game yet, most likely due to how new it is. I’d put it on par with Rowing, as it can be pretty intense at times with squats and knee hits.

The game is pumping and makes a great workout. However, I’d like to see more content in the future. 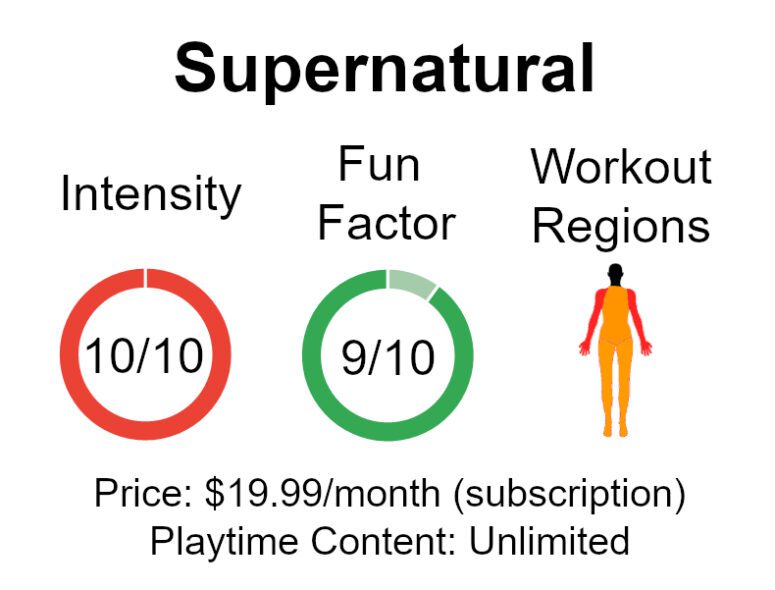 Alright, I’ll admit that I wasn’t really interested in this app at first. I had heard about it plenty of times and didn’t care for it. But, for the sake of science, I tried it out.

Good god, was I invested. The workouts are fun and engaging, the worlds look great (despite just being scans of landscapes), and the coaches are at least amusing to listen to. They also include both warm-ups and cool-downs, the only game on our list that offered them.

The game offers a few different modes, the two fitness ones being “Flow” (Beat Saber-like targets) and boxing. Both modes aren’t particularly hard, but they are a workout. Unlike other rhythm games, you’re encouraged to put your full force and motion into the swing, and you feel the effects as you play. I also enjoy how the game will constantly change the direction of where your targets come from, allowing you to stay on your toes the entire time.

Yet, there is a pretty big downside: it’s expensive. The game offers a 7-day free trial, followed by a $20/month subscription. It’s about the same as a gym membership, so keep that in mind.

The VRIHE doesn’t have a rating for this game, unfortunately. If it were up to me, I would put it under rowing. These workouts can be pretty intense, and they do get you up and moving.

Supernatural offers a great all-in-one solution for a VR workout, but it’s still pretty pricey for what it offers. 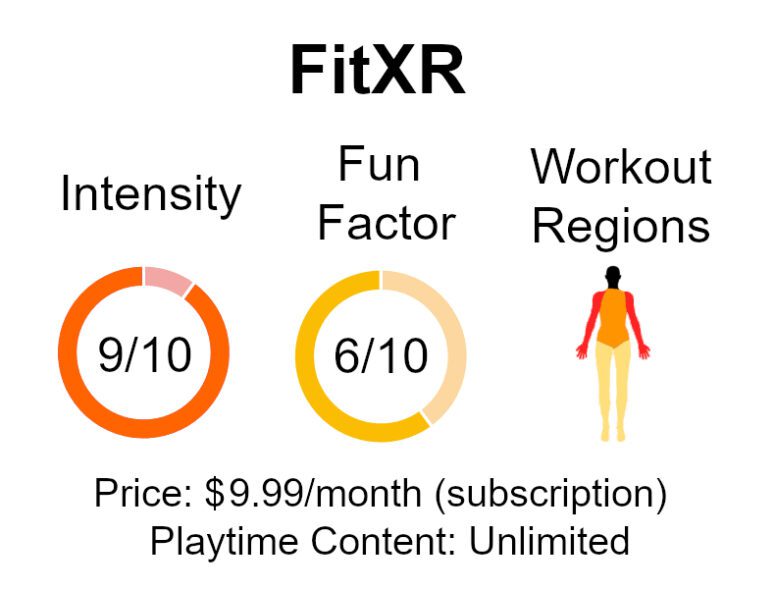 The only other subscription-based option on our list, FitXR, is a little newer and similar to Supernatural. While Supernatural focuses more on an overall experience, FitXR concentrates mainly on their cardio boxing classes while also offering a dance mode.

As far as boxing goes, this is the better option. It feels like a complete experience, with better metrics and visuals. The beatmaps feel better accurate to the beat, and they offer an excellent power metric to make sure you hit the targets with some force.

Dancing looks like you’re following a VRchat avatar with poor tracking. They look bad, the directions are sometimes unclear, and there’s just no motivation there. It looks phoned in, at best. Some of the dance moves are particular and require more precise movements than you can probably keep up with.

They did recently also add a HIIT mode, which seems to be much more polished than the dance mode, but I didn’t play it.

Overall, comparing this to other options, it just feels average. Supernatural feels like a better complete package, and while FitXR is cheaper, I felt like Supernatural had a better overall package.

Again, it doesn’t seem like the VR Institute rated this game. I would put it on par with rowing or tennis, offering a pretty good workout as long as you aren’t dancing.

I would like to see more out of this game, but they offer a decent product for their cheaper subscription fee.

PowerBeatsVR strives to deliver fitness without monthly subscriptions. Their gameplay is a mixture of Synth Riders and Beat Saber with a lot more high intensity movements – especially squats and side-to-side movement, and overall, the workout is way more intense than those games.

The main appeal of this game is being able to import your own songs into the game so you can workout to any of your favorite tracks. The game has an in-built map generator where you import an audio file, tweak some settings, and it’ll automatically generate a map for you: 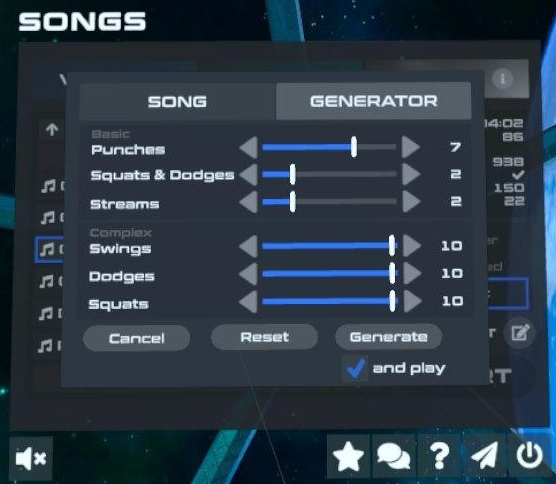 You can also choose the difficult from “beginner,” “advanced,” or “expert.”

If that isn’t enough, one of their users has created a program to import Beat Saber maps directly into the game. 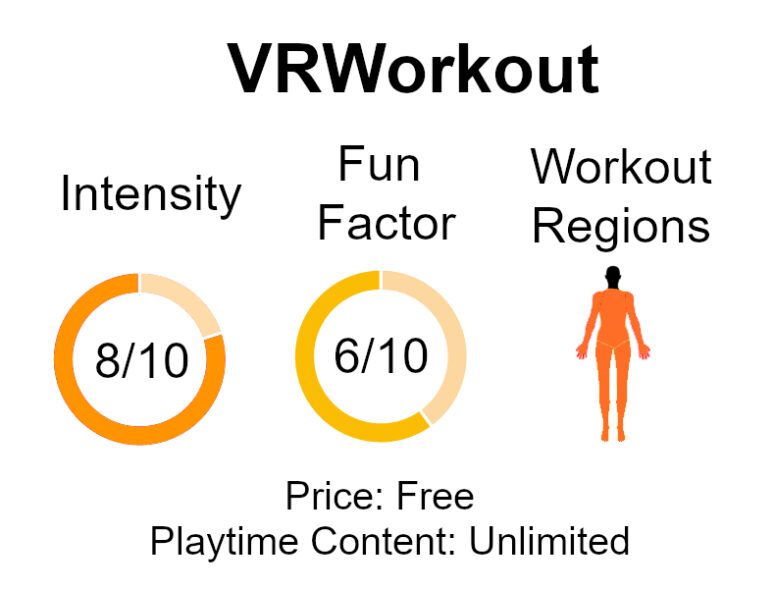 I initially hadn’t heard of this game until I tweeted about working out in Supernatural, and the developers contacted me. VRWorkout is an entirely free fitness app that uses hand tracking instead of controllers.

Because you’re not using controllers, you’re free to open up to other exercises. This includes burpees, planks, push-ups, and jumping. Most of these are pretty unique and don’t appear in different fitness programs.

However, the downside is that you’re relying entirely on hand tracking. I am on a Quest 2 that does offer native hand tracking, but it’s not perfect. Because of that, I had some lag and issues hitting some targets while playing. You can remedy this by using knuckle straps around your wrist, but you need to worry about controllers while moving around.

VRWorkout also requires a lot more space than your typical fitness game. I played all of the games on this list in the Quest 2’s stationary boundary, as my room is a little cramped currently. However, there’s no way you can do planks and push-ups in the default stationary boundary, so make sure you have a more open space.

They also encourage you to customize your workouts, complete with a simple BPM meter to generate a beatmap to your music or audiobooks. While this isn’t for me (I need directions because I’m dumb), I think it’s a welcome addition.

This game also doesn’t have a rating from the VRIHE, most likely due to its relative newness (and that the Institute is currently not accepting new tests). I rate it at about a tennis level, as it can get pretty intense, and you’re doing more than swinging your arms.

The game is still in early access, but what it currently offers is pretty promising. And for the low price of free-99, it’s hard to pass up. I would just like a little more structure.

I didn’t initially think that I would get much of a workout when I started this piece. Sure, I’ve played plenty of Beat Saber, but it’s not precisely jazzercise. However, I’m a believer now after playing all of these games.

For those looking for fun – Beat Saber and Synth Riders are still the go-to apps. Both are amazing and great to alternate when you get bored of the other.

For those looking to exercise to any song they like, PowerBeatsVR is a solid choice.

As for highest fat burning workout, I highly suggest checking out Supernatural for those who want a great workout experience, as I have decided to make it my new daily workout. If the price doesn’t agree with you, you can try out Les Mills BODYCOMBAT or VRWorkout.

About the Author: Jeff Nabors