We run a VR cafe and have bench-marked over a dozen PCs with every type of headset: Rift S, Quest, Index, Odyssey+, Pimax 5K, you name it!

The ‘best’ computer will depend on:

Why VR Requires a Powerful Machine

Unlike flatscreen games, VR games need to be rendered from two different viewpoints: one for each eye. This is to achieve ‘true’ stereoscopic 3D vision. Essentially, this makes VR twice as intensive on your graphics card.

On top of that, VR headset screens have a much higher refresh rate which requires a huge leap in processing power.

Refresh rate is ultra important in VR because it improves the smoothness of motion and can help reduce VR motion sickness.

Therefore, you can never have enough processing power in VR. Even the most powerful graphics cards available today can’t achieve the BEST possible graphics at max refresh rates. You can always push the limits in VR – so my advice is to get the best graphics card you can afford!

Best Computers For The HP Reverb G2 (A Visual Guide)

READ THIS Before Choosing a Computer

On SteamVR, there is a setting called ‘Render Resolution’ (also known as supersampling), which basically allows you to choose the resolution the game is being rendered at.

This can make a great difference on how beautiful and immersive a game looks!! 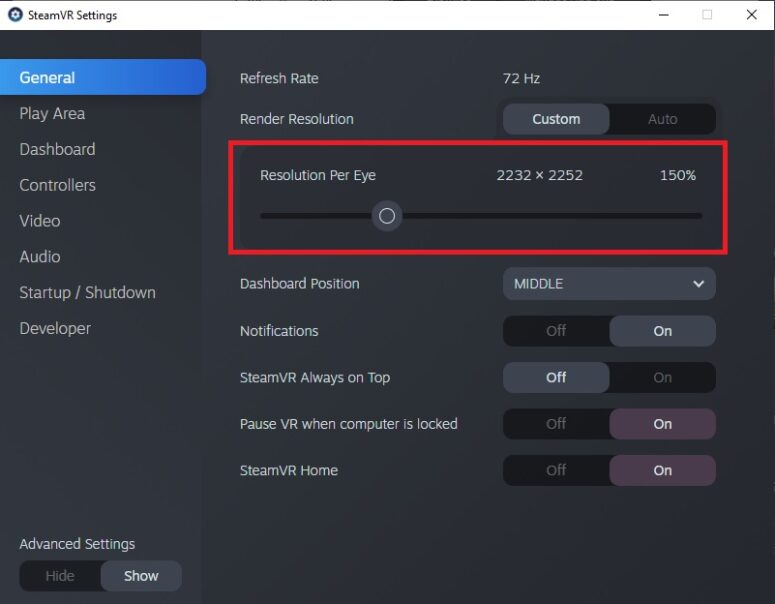 There is also a similar setting in the Oculus app for those with Oculus headsets: 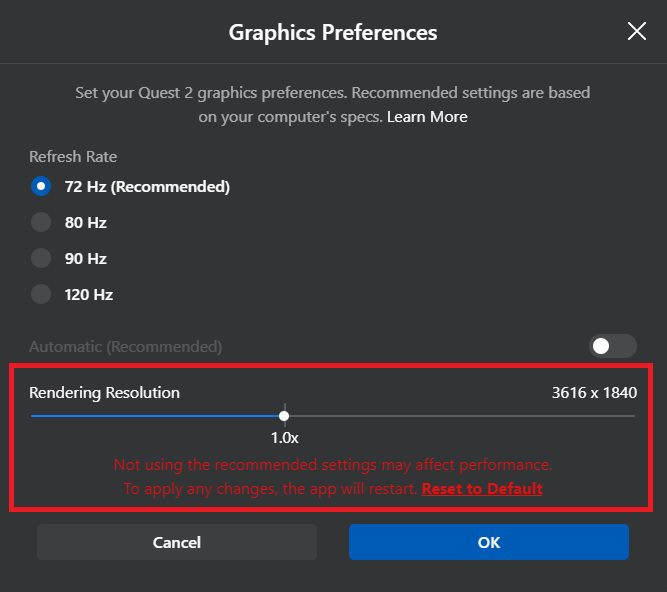 What Each Render Resolution % Means:

So when choosing a computer, aim to find one which can render most games at 130% or above!

Also note: some games are more intense than others, so a computer might be able to render 150% for one game, but only 130% for another.

What Specs Should I look For?

Minimum specs for each headset:

These are the MINIMUM specs required to use each headset, but expect to be playing most games on 100% render resolution and below. I don’t recommend these unless you’re really on a budget.

The most important component when choosing a VR gaming PC is the graphics card (GPU). This is where most the budget will go – everything else: RAM, Storage, processor/CPU isn’t nearly as important.

* For reference, Half-Life: Alyx is one of the most graphically-intensive games on VR, but there are some poorly optimized games with worse graphics that are more GPU intensive.
For less intensive games, you’ll easily be able to push the render resolution past 150%.

Computer prices change all the time depending on supply/demand, so I recommend you browse Amazon for all the RTX computers and find one which is the most bang for your buck.

Catalogue of all computers with RTX graphics cards on Amazon

What about GTX graphics cards?

GTX cards are much cheaper, but also much worse than RTX ones. The top GTX ones like the GTX 1660 is still supported by most VR headsets and work fine for most games. Do keep in mind if you do buy them, you can expect lower refresh rates, less consistency and lower graphics settings.

If you’re really on a budget, you can consider them, however, I personally would save my money for an RTX instead.

You don’t need to think too much here, almost always the CPU that comes with an RTX computer is enough for a VR gaming PC.

Overall, 16 GB is enough for all your gaming needs, but 32 GB will give you more room to multi-task. Both options are okay for now, but I definitely recommend 32 GB if you can afford it.

Storage is cheap nowadays, so I don’t see much reason to cut costs here (especially if you’re a gamer).

If you’re using an Oculus Quest, make sure the computer has an USB-C port.

Feel free to shop around for your own computers, but these are our personal recommendations.

The best bang for your buck. Works with all Oculus headsets: Quest 1, Quest 2, Rift S and will allow you to enjoy VR in stunning graphics!

Valve Index people can also enjoy this, but if you want to make the most out of your headset’s high refresh rate (120/144 Hz) then I recommend a different computer.

For VR gaming on the Quest or Rift S, you need a computer that’s powerful enough to handle gaming on two screens at once at 80 Hz refresh rate (most modern day monitors only run at 60 Hz). Our number one pick is:

This PC is powerful enough to run almost all games on 150% rendering resolution and 120 Hz refresh rate.

And here’s a slightly more powerful PC for those who want to utilize the experimental mode of 144 Hz refresh rate.

And if you want even better graphics: 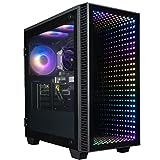 This is a beast of a PC that’ll allow you to push the boundaries of VR: going above 150% rendering resolution and enjoying games on the highest refresh rates of 120/144 Hz.

If you can afford this and are looking for the most immersive experience possible, this is the best option.

Also recommended for ultra high resolution headsets like the Pimax 8K X or HTC Vive Pro 2. This computer is very close to the absolute best computer you can get. 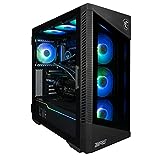 This PC has a less powerful graphics card (RTX 3080 10 GB as opposed to the above computer’s RTX 3080 Ti 12 GB), but you get a trade-off with alot more storage and more RAM for multi-tasking.

Notes: Can pretty much run all games, but you’ll need to make some compromises on either graphics quality or lower refresh rates.

Here’s an even cheaper option, but less powerful, using a GTX graphics card.

This is the cheapest computer for VR gaming that you can get. I’ve tested it with Far Cry 5, one of the most intensive games on PC and it runs perfectly smooth on a 1080p monitor at 60 fps (frames per second).

It’s also capable of running every game on the Best VR Games list on Steam at 60 fps. This computer works on the Oculus Rift S as well as all Windows Mixed Reality headsets such as the Samsung Odyssey+.

The price of this build will subject to change over time, but right now, it costs $550. If you want something more powerful, check out the other options:

This computer is for hardcore VR gamers who are looking to run the most intensive VR games on the highest settings whilst on a budget. Works with the Oculus Quest using Oculus Link. Also can work on the Valve Index at lower refresh rates (80, 90 or 120 Hz). This is the most bang for your buck VR-ready PC.

Important Note: The motherboard BIOS needs to be updated in order to be compatible with the Ryzen 3600 processor. You’ll need to download the BIOS, put the file onto a USB stick and insert it into the motherboard like this tutorial.

This will save you abit of money on the motherboard, BUT if you don’t feel comfortable doing that, just purchase the MAX version of the motherboard which is only slightly more expensive.

The best of the best. It’s not only VR-capable, but expect it to run every VR game on the market for years to come.

This computer is for Valve Index users who want to run games on highest graphics at 144 Hz refresh rate.

Note: The other builds work for the Valve Index too, but you might have to lower the refresh rate to 80, 90 or 120 Hz depending on the game. If you have enough money for a Valve Index, you might as well buy a computer that can sustain it at max settings.

This is also a perfect computer for Pimax 8K, Pimax 5K and other intense headsets.

With 32GB of RAM, this computer can handle extreme multi-tasking for those who like to play games whilst having 100 browser tabs opened.

If you don’t multitask a huge amount, feel free to change the RAM to 16GB to save money. You can also cut costs by:

If you’re a VR enthusiast who has money and wants to experience the best VR has to offer, this $1650 deluxe build is the way to go. You won’t ever have to worry about running into limitations in the future – this will handle whatever VR has to offer in the next 5 years and possibly more.

This is the best computer for VR you’re ever going to get at this price.

If you need a PC at a custom price, feel free to contact me at hello@vrheaven.io and I’ll see if I can help.