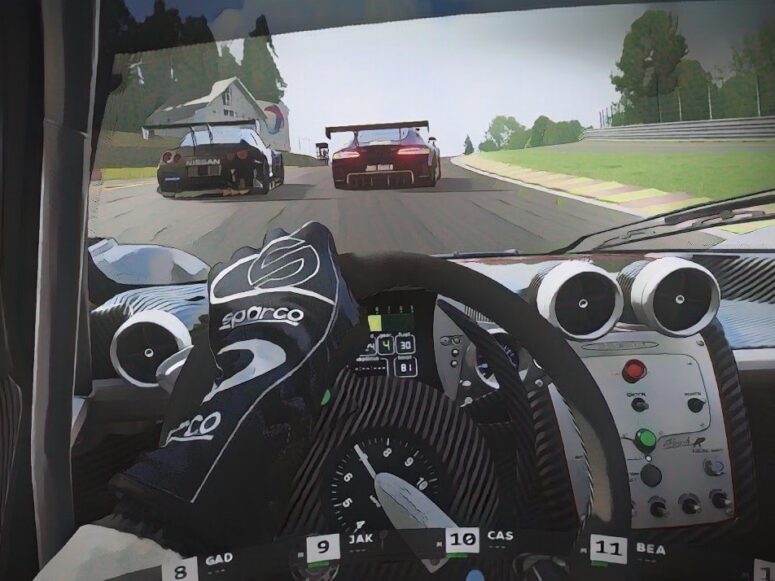 Have you ever wanted to feel what it’s like behind the wheel of a Lambo?

What about the thrill of flying down a muddy forest road at a hundred miles an hour?

Sim racing has been a growing hobby for years now. With VR technology, it’s become even more accessible for those who want to experience true immersion.

I didn’t grow up enjoying cars, or racing that didn’t have Mario in it. But over the pandemic, I got sucked into watching Netflix’s Drive to Survive and got hooked on Formula 1. It wasn’t soon after that I bought my steering wheel and started flying around some tracks.

Then I picked up a Quest 2 and it changed everything.

Sim Racing offers an incredibly immersive experience unlike any other. It’s a true testament to how powerful VR can be, too.

Heads Up: PCVR Only!

It’s important to note that almost all of these games are for PC only. Some games may also be on Playstation, but they might not have VR support.

Also, playing on PC for these games is truly the best experience. Most sim racers offer robust mod support to improve your experience or to add new cars and tracks. This can’t be done on consoles.

VR vs. Flatscreen for Sim Racing

When it comes to sim racing, there’s a pretty big dividing line between VR or going with a traditional setup. Personally, I think the answer varies based on your budget.

If you can’t afford an ultrawide screen or triple monitor display, then VR is the way to go. It’s much more immersive than a traditional display, and often way cheaper.

However, if you have the budget (and space) for a custom rig or triple monitors, it’s by far the ultimate experience. At least, until sim racing catches up to modern VR.

Do I need a Racing Wheel for VR Racing?

While you can get away with a traditional gamepad for a while, nothing beats the immersion of holding an actual steering wheel. You don’t even need to start out with an expensive Direct Drive wheel either, as cheap wheels can be found at around $150.

It’s also important to note that there are no VR sim racers that have touch controls, so you’ll need a gamepad to play these titles anyway.

I’ve compiled a list of what I think are the five best VR-ready sim racing games out there. I picked these out from personal experience and popularity within the sim racing community. In the end, I’ll also cover a few games that didn’t quite make the list.

The Best All-Around Sim, and one of the oldest out there. iRacing has been around since 2008 and it’s popular for a reason.

iRacing offers almost any kind of racing you want, from NASCAR to Formula One to GT racing, it’s all here. This game is so popular that even real F1 drivers use it, including world champion Max Verstappen.

Thankfully the game separates you from other drivers with an in-game license system. That way you can learn the rules of the road and get comfortable with a similar skill group while working your way up to the big leagues.

Yes, iRacing may be just a measly $10 on Steam, but it also requires a paid subscription to play. On top of that, you have to pay for additional tracks and cars, each one anywhere from $12 to $15! The basic subscription only offers 16 cars and 22 tracks.

The actual game physics are superb as well. Everything feels right, and the tracks are all laser-scanned for ultimate accuracy.

Seasoned veterans who are looking for the ultimate competitive experience will probably end up with iRacing one way or another. It’s unmatched when it comes to competition, and sadly also the most expensive game on the list. Rookies and newcomers should look for other titles, and move to iRacing after they’ve gotten deeper into the hobby.

The game excels in content and offers a truly amazing experience. iRacing is the de facto king of competitive sim racing, despite its monolithic cost.

An excellent starting point for new drivers, AC is well known for its modding community. The physics are excellent, and the game’s thriving modding community has made it so you can race on hundreds of tracks in any car you want.

However, the game does require some tinkering, and the VR implementation isn’t perfect. Namely, you’ll need to take off your headset to navigate the menus, as VR only works once you’re in a car.

The game also has some unique issues with some steering wheels, so prepare to google-fu for some workarounds. For example, my pedals didn’t work automatically within the game, so I had to look around for some common troubleshooting answers before it finally worked.

Don’t let that put you down though, as AC is still one of the most popular racing sims out there! It offers a good starting point for sim racing without needing a lot of setup and is extremely flexible.

Assetto Corsa is great for beginners and veterans alike. The simulation is very accurate, and the modding community means that there’s no end to the content.

AC manages to excel in all categories, except when you’re racing. Menus are clunky and not in VR, and getting the game set up can be a painful experience.

Wanna get dirty? Codemasters have cornered the rally racing sim market for years now, and this entry is one of the best for realism.

It’s important to mention that rally racing is not for the faint of heart, as you are constantly threading the needle between risk and reward. Not everyone can drift a hairpin doing 120 in mud and avoid crashing.

This also means that those who haven’t quite gotten their VR legs might experience more motion sickness than other titles. Off-roading is bumpy and brutal at times.

Codemasters once again has opted to not allow modding of the game, so don’t expect to be adding anything extra outside of DLC.

The reason I recommend this entry over DiRT 5 is that this one has a much more realistic simulation compared to the other. DiRT 5 is a fantastic game, but much more of an arcade racer than a simulation.

Rally racing is unlike any motorsport, and it can be overwhelming at first. Don’t feel disheartened if it takes some time to get into.

Those looking for a truly unique experience will fall in love with this game, but those looking for more relaxed experiences should look elsewhere. Also, those prone to motion sickness will find the game unplayable.

If you’d like to sacrifice a little bit of realism for a gigantic amount of content, Project Cars 2 (PC2) is the king.

The simulation for this game is not as accurate as the other titles on this list, but it gets the job done. This is only a dealbreaker for those who want the most accurate sim possible. Those who just want a more realistic feel than traditional arcade racers won’t mind at all.

While PC2 doesn’t offer mod support for extra cars and tracks, it does feature a huge amount of content off the bat. There are almost 200 cars and 140 different tracks to choose from, across several classes of motorsports.

For me, this is where I started. The immersion is unreal, and your first wet race in your low-rank GT car is a memory you’ll never forget. The weather system in this game feels true-to-life, and it makes a real impact on driving.

PC2 is an excellent entry for beginners and casual fans of the hobby. It’s accurate enough, offers a lot of content, and is visually appealing. The simulation might not be as accurate as others, but it’s a great starting point.

I think PC2 is the best start for those who are trying out the hobby. It’s a great game on its own and makes a great stepping stone to other racing sims. The simulation isn’t perfect, but it does enough to get you immersed.

The cream of the crop, and the finest class of motorsports. I got into F1 through Netflix’s Drive to Survive, and these games are just like being dropped into the world.

I bundled these two together mainly because they’re practically identical. They both offer the same experience (with a slightly better simulation for the 2021 game), and roughly the same amount of content.

However, this is exclusively limited to just the Formula 1 experience. Both AC and PC2 offer Formula 1 as well, but this is a more dedicated version for fans. 2020’s entry offers some classic cars to choose from, but the latest entry does not.

The only major difference between the two is the single-player career mode. F1 2021’s career mode is a lot more fleshed out story-wise than the previous year, but the racing is the same overall.

I’d also like to mention that F1 is also pretty hard, just like DiRT Rally can be. It’s the pinnacle of motorsports for a reason, the cars are insanely fast and you need to make quick braking decisions often. Don’t be surprised if it takes you some time to get used to racing, with or without assists.

Die-hard Formula One fans will love this series. It lacks variety, as the Formula One circuit is only 21 tracks. Even with upcoming DLC, the game won’t have nearly as much content as other ones on the list.

As much as I love F1, it’s not for everyone. The amount of content in these games is nothing compared to others, and naturally, almost all of the cars only share a few tiny differences. Those who want the authentic F1 experience and nothing else will love it, but those who want more are better off elsewhere.

There’s a surprising number of VR racing sims out there. While I didn’t list them all, here are some other ones that you should check out:

Why do I need a steering wheel?

None of the current racing sim titles out there supports touch controls in any way. You can get away with using a gamepad for a while, but the real immersion doesn’t set in until you start using a wheel.

Can I get by with Project Cars 2 from the Quest Store?

You can’t mod this version of the game, which is one of the best features of the PC version. You also can’t plug in a steering wheel to a Quest 2, and the price for the Steam version is usually under $10 during sales.

What Headset Should I Use For Sim Racing?

Thankfully, VR racing doesn’t really need any of the expensive add-ons that come with some VR games. You don’t need full-body tracking, as it’s a seated experience.

I’d recommend the Meta Quest 2 for most people, as it’s the best entry-grade headset on the market. The price is hard to beat, and it’s wireless so you don’t need to worry about pulling any cables out.

See other best VR games you can play on the Quest 2.

To keep a long story short, Sim Racing is one of the most immersive genres of games you can play in VR right now. It’s an experience that’s only rivaled by soaring through space in Elite: Dangerous.

If you want to get your toes right into the hobby, this is what you should do:

About the Author: Jeff Nabors