The Best VR-Ready PCs for the Oculus Quest 2

One of the biggest draws for the Quest 2 is the low barrier of entry for a PCVR-ready headset. It is an extremely affordable headset, but it also lets you spend more money on a good VR-ready PC to get the best possible experience in virtual reality.

Do You Need a PC for the Oculus Quest 2?

The Quest 2 is one of the few and by far the best standalone VR headsets. It can run plenty of games without needing a PC at all, but the performance is much better with one.

While it can play a lot of the same games as PCVR via the Oculus Store, the graphics in comparison to desktop VR standards are a huge difference. Objects are never as detailed on native Quest applications, and the draw distance can be severely limited.

In other words, games will look much more vibrant and detailed, and you can reach much higher frame rates.

How To Connect A Quest 2 To Your Gaming PC

You’d be surprised to know that not a lot of Quest 2 owners are even aware that they can use their Quest 2 for PC VR. I’ve talked to dozens of users in my short time on VRChat about how they can connect their headsets for a better experience.

READ THIS Before Choosing a Computer

For SteamVR; there’s a setting called “Render Resolution,” also known as supersampling. Essentially this allows you to change what resolution the game gets rendered at.

This can greatly impact a game’s visuals, adding to the immersion while adding a little more stress to your system.

Although a computer might pass the minimum specs for VR, I recommend you should aim for a computer than can render most games at 130% or more if you can afford it.

According to Meta, the official recommended specs for a Quest 2 on PCVR through Oculus Link are:

As you can see, the Quest 2 can run PCVR on relatively low specs, with the low-end GPU being nearly seven years old. While the 970 can get the job done for most low-detail VR games, it will struggle as time goes on. Most gamers are better off future-proofing with something a little more modern to keep their rig ready for the next AAA game.

For an optimal experience, you should be aiming for something that can support a bare minimum of 72 fps in games, or 90 fps for those who want an average experience.

Editor’s note: Please remember that there is still an ongoing GPU shortage. Don’t be surprised if some GPU card prices are massively over MSRP, or difficult to find.

What Kind of Computer do you Need for the Oculus Quest 2?

You need a computer with a powerful graphics card, capable of rendering two screens at once (one for each eye) at 72 Hz refresh rate or higher. The graphics card is the most important component to a VR-ready computer. For RAM, it’s extremely recommended you go for at least 16 GB. Whilst a good processor is nice, it isn’t necessary.

Laptops Vs. Desktops for VR

Some folks prefer the mobility that gaming laptops can provide or the price-to-performance ratio.

I am not one of those people.

Gaming laptops are usually pretty poor choices for dedicated gamers and are better off suited for the casual crowd. However, when it comes to VR, it’s even harder to recommend these.

Laptops always underperform in comparison to desktops within the same price range. Most laptop-grade hardware has to sacrifice performance for size, meaning that laptop GPUs and processors just can’t compare to their desktop siblings. A RTX 2070 on a laptop is going to be worse than an RTX 2070 on a PC. Plus, most laptops are difficult or impossible to upgrade, reducing their longevity.

Another important note is cooling. While gaming laptops might have decent cooling, they often get extremely loud and can sometimes overheat after extended gaming sessions, because the fans are typically drawing air from underneath the laptop. Desktops, on the other hand, offer much better cooling options and more cooling fans.

Regardless of the price point you may be shopping for; you can almost always find a desktop with much better hardware at the same price. Plus, they won’t sound like jet engines taking off.

If you really don’t have a choice, then you can choose a laptop from this list: best laptops for Oculus Quest 2.

For those who want to dive into VR as soon as possible with the lowest price, this is going to be the best you can get. This is the cheapest computer for the Oculus Quest 2 that’s recommendable. Games like Beat Saber, SUPERHOT will run with no problem. But do note: Graphics intensive games and poorly optimized games will not run without some major compromises.

This PC’s GTX 1650 is better than the Quest 2’s minimum specs, and it does offer enough to get you into games like VRChat or Elite Dangerous at the lowest barrier of entry. In most cases, you’ll be running at 100% render resolution with a steady 72 frames per second.

This is the minimum specs I would personally recommend for a VR-Ready PC.. It’s rocking an RTX 2060, which can tackle just about any VR game on medium to high settings at 130% render resolution.

The only real downside to this is that the rest of this prebuilt is somewhat lackluster, so you may want to invest in some additional RAM and hard drive space soon after. RAM is ultra easy to add. 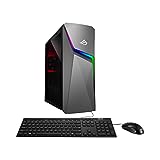 A true ballin’ on a budget option, this rig will get you into VR without much of a tradeoff. The GTX 1660 Ti is a stellar card that can get you far in most VR games, but it won’t be maximizing your settings.

You’ll more than likely just be able to stay around 100-110% render resolution, but you’ll have a steady 72 fps for your games.

Normally in this slot we’d be recommending computers with a GTX 2060 or 2070, however it seems that CyberpowerPC really lowered the bar with this desktop. Not only does it come with a GTX 3060 for a lower price tag than a rig with a 2070, but it also comes with stellar hard drive space and RAM, meaning you can easily run anything on 130% or 150% render resolution, including Half-Life: Alyx. 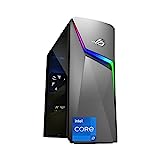 If you really want to slay any game in VR, this rig by ROG is for you. Rocking an RTX 3060 with 16GB ram, this is ideal for people who want to play:

This card will easily get you to 150% render resolution and 90-120fps in VR with no issues whatsoever.You could probably go higher than that, but it won’t be a noticeable effect.

If you truly want to push VR to it’s limits, this is the best gaming desktop for the Quest 2. Not only does it come with 32gigs of RAM and an RTX 3080, it also has an Intel i7 processor to keep everything running buttery smooth. It can easily handle whatever you throw at it, including 150% render resolution.

Our only words of warning are that with this kind of rig, you might want to be upgrading your headset. While the Quest 2 is great, if you’re spending nearly $2700 on a computer you may want to look into one of the higher-resolution VR headsets, like the Pimax 5k Super or 8K X.

“What if I don’t have enough money for a VR-Ready PC?”

If getting a VR-ready gaming desktop isn’t within your budget, you can always try Plutosphere.

Plutosphere is an up-and-coming cloud gaming service that allows you to play high-end PCVR games without needing a computer at all. It’s streamed straight to your headset, as long as you have a stable connection. You can check it out now while the service is in early access and see if it works for you!

What kind of computer do I need for Oculus Quest 2?

A powerful gaming computer with a good graphics card will work for the Oculus Quest 2. The difference between VR and flatscreen games is that:

What’s the best GPU for VR?

If you want the best of the best for VR gaming, it’s hard to pass up the RTX 3070 Founder’s edition. Not only does it offer the best specs on the market, but it can also handle anything you throw at it with ease.

However, we recommend the RTX 2070 as a stellar option for 130% render resolution and a great framerate for most games if you’re on a budget.

How do I know if my PC is VR-ready?

Most VR headset manufacturers recommend having a minimum of a GTX 970 or an equivalent. We don’t recommend any GPUs below a GTX 1660 unless you’re on a tight budget, and even then you’ll want to upgrade within a couple of years.

What games can you play on Oculus Quest 2 without a PC?

In short, you’ll have access to Quest Store titles. You won’t be able to play Steam games like Half-Life: Alyx. For more information, read: What games can I play on the Quest 2?

Can you play Beat Saber on Oculus Quest without a PC?

Yes you can, since Beat Saber is on the official Oculus Quest Store. You can even add custom songs and mods to it.

When it comes to PCVR on a Quest 2, the minimum specs aren’t quite accurate. While you can get away with a weak, old card like the GTX 970 for a time, it will quickly hit its limit unless you’re only trying to play games on ultra-low.

Sticking with a mid to high-end GPUs can work wonders for your games and make your VR experience significantly better. Whether you’re ballin’ on a budget with a 2070 or soaring through the metaverse with a 3080, there’s a computer out there for your wallet.