So when I started playing EXPERT+ maps, I started getting wrist pain frequently because thousands of wrist motions in a few minutes isn’t something our bodies were made for.

But basically, if you want to become a really good Beat Saber player, you NEED to use your wrists ALOT.

Unfortunately, that would also lead to more wrist pain, and sometimes even permanent damage.

I know many people who can’t even play the game they love anymore because the damage is so severe that even if they take a long break from the game, the pain will come back shortly after they begin playing again. Don’t let this happen to you. If your wrists are hurting, stop playing.

First of all, if your wrists are hurting frequently, take a LONG break from the game and let your wrists FULLY recover. That’s what I did.

How long? My doctor recommended one month. I didn’t follow his advice at first and paid for it. I jumped back in after 2 weeks and the pain came back shortly after.

But how the hell do you go one month without playing Beat Saber?

Instead, what I did was I found a substitute game that works out your body just as much or even more than Beat Saber, but didn’t engage your wrists at all. That game was Thrill of the Fight, because I love boxing. But there are other options out there including rhythm games like BoxVR and Synth Riders.

It’s good to have these substitute workout games because when you feel that your wrists are hurting and need a break, you’ll still be able to exercise in VR.

There are a lot of myths when it comes to stretching and why it doesn’t work for most people.

The biggest one is the one that I hear coaches and fitness instructors tell their students all the time: stretch or warm up before exercising. They think stretching before exercising will loosen the muscle and prevent injury. Nope.

Scientific studies have shown that stretching before exercise does NOTHING for injury-prevention.

The truth is: stretching before exercise does little to nothing. Instead, of stretching before playing Beat Saber, you should be doing stretches for 5-10 minutes every day over many months or years regardless of whether you have wrist pain or not.

Why? Because this will improve your joint flexibility and mobility. In the long run, this will decrease your risk to injury.

It doesn’t matter when you do it: it can be before exercise, after exercise, when you wake up, before you sleep or some random time. JUST DO IT.

Some studies have even shown that the best time to stretch is after exercising when your muscles are the most loose. So if you’re unsure of when to stretch – try stretching after you play Beat Saber.

Dr. Levi, a gaming doctor who’s known for helping Osu! players with RSI has made a video about Beat Saber. He shows you the different kind of stretches you can do for your wrists, shoulders and elbows to prevent injuries.

If you really love Beat Saber and want to keep playing it in the long run, I recommend doing 5 minutes of  these stretches every day:

There were a few lifestyle changes that made a big difference for me.

The biggest one was sleeping with my wrists straight instead of bent. 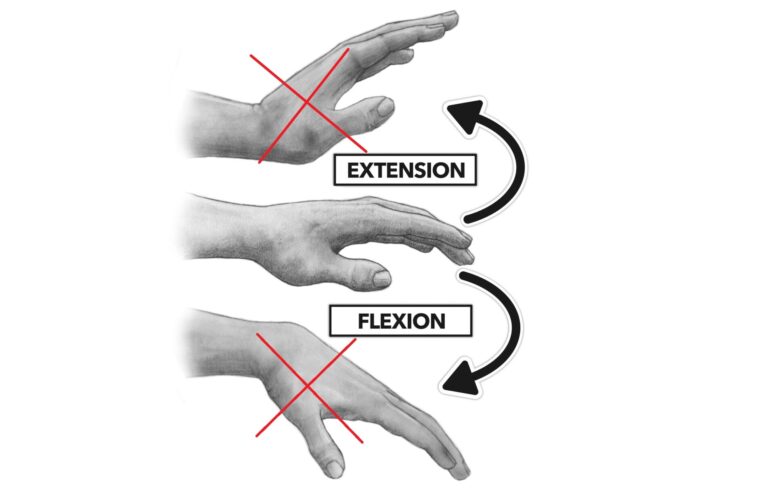 I’m a sideways sleeper and I had my wrist bent under the blanket when I was sleeping. This would cause or worsen pre-existing injuries. Sleeping sideways has been associated with greater risk or Carpal Tunnel Syndrome because the person is more likely to bend their wrist.

Your wrist should be straight (slightly bent is also fine). It should be completely relaxed. If it’s tense then you’re doing it wrong.

Once I stopped doing that, I noticed massive improvements.

Wearing a wrist brace can also help keep your hand in a stable and relaxed position at night.

Secondly, I avoided any motions that would aggravate my wrists including push-ups and lifting weights. I also avoided leaning on my hand on the table which I do sub-consciously.

This might not be the most important thing in the world, but every little thing you do matters, so I’m gonna leave it here:

Eat bananas. Get plenty of magnesium. Half the US population is deficient in magnesium so there’s a good chance you’re lacking in it too.

If you’re lacking in magnesium, you’re more likely to have:

So start eating more foods which contain magnesium and that should help with your joint pains.