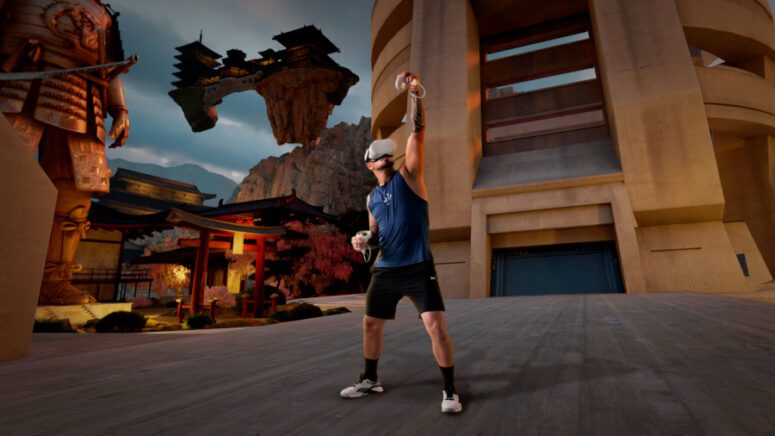 A new workout game called ‘Les Mills BodyCombat’ is arriving on the Quest Store, Feb 3. It’s developed by Odders Lab, the developers of OhShape, in conjunction with Les Mills, a global leader in group fitness with over 140,000 instructors and 21,000 clubs worldwide.

What is Les Mills BodyCombat?

Les Mills BodyCombat is a MMA-Style VR workout game which will be available on the MetaQuest Store on Feb 3, 2022. It’ll cost a one-time payment of $29,99 and includes 30 beginner to advanced workout plans (lasting between 5-25 minutes each).

You’ll have two world class fitness instructors, Rachael Newsham and Dan Cohen, showing you the ropes and pumping you up during the workout.

The company also said they’ll be adding an optional monthly subscription plan that adds multiplayer mode, along with many new features and tons more training plans.

The gameplay feels similar to FitXR where you’re throwing punches at targets coming towards you with some music playing and the instructors pumping you up during the workout. The variety of punches you can throw is much more varied that FitXR: jabs, straights, hooks, uppercuts, hammerists and more.

In addition to that, the gameplay involves squats, side-to-side slips, and knee strikes which makes it an excellent full body workout – for arms, core and legs – something which most other VR games lack as they tend to target the arms only.

There are 5 environments to choose from, with more installed for the future.

Some of the music artists are Noam Dee, Fas Fash, MOW MUSIC & more.

How Intense is the Workout?

I’m someone who uses VR for fitness daily.

I play mostly Beat Saber, Thrill of the Fight and Synth Riders although I’ve tried Supernatural and FitXR before.

Les Mills BodyCombat is the most intense workout game I’ve played to date and by the end of the 20 minute session, I was totally burnt out and my legs were sore the next day. It’s far better as a workout than Beat Saber and Synth Riders, whilst Supernatural & Thrill of the Fight comes close to it.

Note: I did the high intensity 20 minute workout. If you’re a beginner and afraid of being too out of shape, there are ‘beginner’ and ‘intermediate’ workouts too!

Is Les Mills BodyCombat Worth it?

If you’re a fitness junkie and you feel other VR workout games are failing to target your lower body or core, then yes, Les Mills BodyCombat is a great option for VR workouts. It’ll help you burn calories faster than any other VR app/game!

Take a look at our gameplay video and see if the gameplay/music suits your tastes.

Les Mills BodyCombat will be available on the Oculus/Meta Quest Store.